"If I was two-faced would I be wearing this one?" How Lincoln energized the nation.

What made Abraham Lincoln such an energizing leader? Here's six lessons that I gleaned from this piece that appeared in The Week. The writing credit goes to Eric Barker.

1. Get out of the office and circulate among the troops

Historians believe he met every single Union soldier who enlisted early in the Civil War. In 1861 Lincoln spent more time out of the White House than he did in it. If a Union soldier had enlisted early in the Civil War, he likely saw the president in person. Lincoln made it a point to personally inspect every state regiment of volunteers that passed through Washington D.C

Lincoln knew people were his best source of information. And accessibility built trust. Lincoln effectively had an open-door policy. John Nicolay and John Hay, his personal secretaries, reported that Lincoln spent 75 percent of his time meeting with people Lincoln was always trying to get the best information so he could make good decisions. He virtually lived at the War Department's telegraph office so he could gain access to key information for quick, timely decisions

2. Persuade rather than compel

Despite having the power of the presidency, Lincoln didn't strong-arm people; he persuaded them.
He made them his friends. He made them like him. Here's Lincoln talking about his methods:
“ It is an old and a true maxim, that a "drop of honey catches more flies than a gallon of gall." So with men, if you would win a man to your cause, first convince him that you are his sincere friend. Therein is a drop of honey that catches his heart, which, say what he will, is the great high road to his reason, and which, when once gained, you will find by little trouble in convincing his judgment of the justice of your cause, if indeed that cause really be a just one.”
And it shows in the way he handled subordinates. He didn't give orders — he made requests. Look at his letters:
3. Lead by being led

Lincoln always gave credit where credit was due and took responsibility when things went wrong.
Not only did this satisfy Lincoln's need for honesty, integrity and human dignity; it also gave his subordinates the correct perception that they were, in many ways, doing the leading, not Lincoln. If nothing else, it made them feel good about their jobs. It also encouraged innovation and risk taking because they knew that if they failed, Lincoln would not blame them. Lincoln had no problem saying he screwed up, like in this letter to General Ulysses S. Grant: “I write this now as a grateful acknowledgement for the almost inestimable service you have done the country. I wish to say a word further. When you reached the vicinity of Vicksburg… I never had any faith, except a general hope that you knew better than I that the expedition could succeed… I feared it was a mistake. I now wish to make the personal acknowledgement that you were right, and I was wrong.”
.
4. Encourage innovation

What did Lincoln know about innovating? Well, he's the only U.S. President to ever patent something.Years before assuming the presidency, Lincoln had shown his interest in innovation when, on March 10, 1849  he received a patent for a new method of making grounded boats more buoyant. And even during his most difficult times, Lincoln continued to call on his subordinates to screen new advances, implement ideas, and win while learning. He realized that, as an executive leader, it was his chief responsibility to create the climate of risk-free entrepreneurship necessary to foster effective innovation

Lincoln was a great storyteller and he actively leveraged this skill to win people over. Lincoln reports “They say I tell a great many stories. I reckon I do; but I have learned from long experience that plain people, take them as they run, are more easily influenced through the medium of a broad and humorous illustration than in any other way”

6 Don’t take yourself too seriously


Honest Abe  had a good sense of humor: "If I were two-faced, would I be wearing this one?"
Like President Reagan, he knew that by self-deprecating he was endearing himself to the population 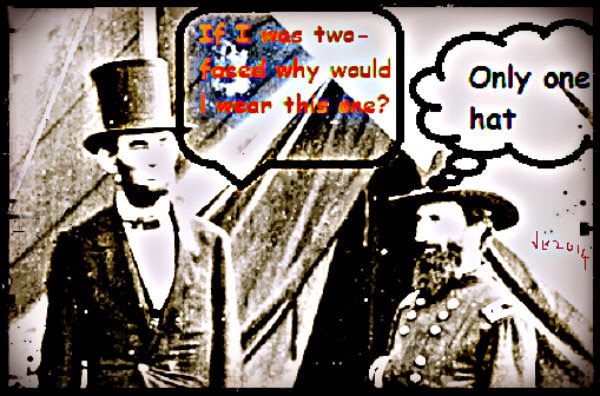 "If I was two-faced why would wear this one?" asked President Lincoln. 'Only one hat,' thought the General to himself.

Six leadership lessons from a highly energizing President!   Of course, if you try to emulate him there's no need to wear that ridiculous top hat...in fact, I would counsel against it unless you are running some form of Funeral Home.